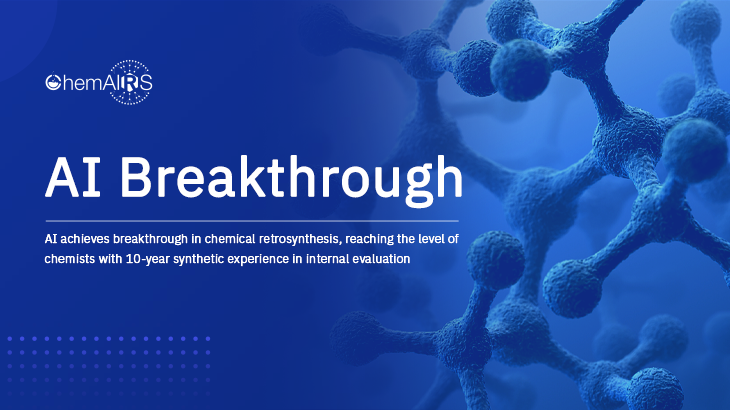 Nowadays, artificial intelligence is widely used in new drug discovery, such as target screening, molecular design, and activity prediction etc. As far back as 50 years ago, Nobel Laureate E.J. Corey had tried to use computer technology to assist retrosynthesis route design. However, the expected goal was not achieved due to the hardware and software conditions at that time. In recent years, several artificial intelligence-enhanced retrosynthesis systems have been developed and gradually applied to pharmaceutical industry. However, no published test has been reported to compare the route design capabilities between artificial intelligence and experienced chemists. Recently, a Human-Computer Evaluation has been conducted between the ChemAIRS Retrosynthesis System developed by Chemical.AI and experienced chemists from Shanghai Chemiscal Biotech Co., Ltd.( abbreviated as Chemiscal). A comprehensive evaluation considering of synthetic steps, level of synthetic difficulty, route feasibility, and synthetic strategies has been performed.

22 molecules without chirality were selected for the evaluation, with almost the same difficulty and complexity level as those encountered in real practice. Their synthetic steps range from 8 to 14. 16 chemists with an average of 10 years’ synthetic experience designed routes aided by literature or other tools. ChemAIRS performed route design simultaneously, with two routes per molecule being selected. The expert review groupevaluated the routes without knowing who designed them to ensure fairness. The evaluation criteria included the synthesis rationality, the number of synthetic steps, reaction feasibility and the diversity of routes available. Score of the Route Feasibility

Each synthetic route of the 22 molecules designed respectively by chemist or AI was evaluated by a panel of six senior chemists. A feasible route should be above 6 points and up to 10 points. A comparison of the chemist's score and the AI score showed that in 10 cases, the AI route score was close to the chemist's score (within 0.5 point). In seven cases, the chemists scored higher on average, and in five cases, the routes designed by the AI scored higher on average. Overall, the AI performed equal or better than the chemists in 68% of the cases. Diversity of the Synthetic Routes

The panel also counted the number of different synthesis strategies for the AI routes, which normally are difficult for chemists to work out. However, in practice, it is often necessary to change the synthesis strategy due to the failure of a key step. In this evaluation, the AI gave 5-20 different routes within a few minutes. As can be seen from the figure below, in these Al routes, each molecule can have an average of 2-6 different synthesis strategies, including different key steps and key intermediates, helping chemists quickly find more successful methods and the most economically available starting materials. The panel selected 3 molecules from 22 test molecules to demonstrate the feasibility of the synthetic route of AI algorithm being similar to or even better than that of chemists. Taking TM1 as an example, in the reaction of constructing an imidazole ring, the chemist first constructed an imidazole ring with triethyl orthoformate in the sixth step, and then iodized and coupled the imidazole ring successively. In the AI synthetic route, aromatic aldehyde and diamine substrate are used directly to construct aryl substituted imidazole rings in the fifth step, indicating that the synthetic steps of AI route are shorter and more efficient.

In the synthesis of TM3, a 7-member oxygen ring needs to be constructed. The chemist route first obtains the 7-member oxygen ring through Friedel–Crafts reaction and then transforms it into subsequent functional groups. However, the Friedel–Crafts reaction in the second step may have problem of site selectivity, which is bound to affect the subsequent separation and identification. In the AI route, the synthesis of diol compound is completed in the fourth step, and the construction of seven-member oxygen ring is completed through Mitsunobo reaction in the fifth step, and there are no selectivity problems, and no feasibility problems in other synthetic steps. The AI route scores better than human synthetic route.

Based on the results of route design speed, feasibility and diversity, the current ChemAIRS route design capability is very close to that of chemists with 10-year experience in synthesis, while the design speed and strategy diversity of ChemAIRS exceed those of experienced chemists. ChemAIRS also improves the route design speed by about 10 times. Similar or better routes are designed faster in 68% of the cases. Meanwhile, the algorithm can also provide chemists with 2-6 different synthesis strategies to find better and more economical route, to solve the problem of difficult target molecule synthesis.

AI technology represented by ChemAIRS cannot replace chemists, and AI cannot replace chemists to think innovatively for some novel structures. But it is an important tool for chemists to design routes that could enhance human intelligence in the similiar way that cars make people faster. It is believed that chemists will be able to design better, more economical and environmentally friendly synthetic routes more efficiently and easily with the help of such tools.

Note: Due to the limited number of molecules in this evaluation, the results are not statistically significant, and more in-depth and comprehensive test studies in future are expected.